skip to main | skip to sidebar

So, the Little Hunneydoo left the house this morning for work, only to discover that some piece of shit crackhead had broken into her vehicle overnight and stolen the dollar that we keep there for the shopping cart at the gocery store. He/She also took the garage door remote that was on her sun visor.

If the POS CH let him/herself into the garage, they neither touched my car nor made off with anything else. Nor did POS CH wreck the Little Hunneydoo's lock or smash her windows. So mostly, we are inconvenienced in that we have to reprogram the garage door opener so that the stolen one won't work. And that means borrowing a ladder that we don't have, yadda yadda. Whatever. It could have been much worse. I'm not actually complaining. Much.

But after describing the event to my co-workers (who, it seems, never pass up a chance to prove how profoundly ignorant they are), Princess Anne said, "It was probably one of those Occupy Our Town jerks."

Yeah, because people who are peacefully protesting the appalling corporate greed that is rampant in our consumer-based society are all about stealing, you fucking moron.

Whether you agree with the Occupy movement or not, that comment makes absolutely no sense whatsoever.

Last week I applied at the local humane society for the position of Administrative Assistant/Receptionist. It pays three dollars less than I am currently making with these brain dead shitheels.

Two Clowns is universally disliked in the office, even by the other managers, a group she has deluded herself into believing she belongs. Proof of this was amply proffered this afternoon, when Jacques (who is French Canadian) approached Princess Anne at the reception desk and indicated Two Clowns's south-facing office with a jerk of his head.

And it's true. Perhaps because she is really a reptile cleverly disguised as a person, Two Clowns's office is always Saharan in temperature, even in August. It's a lot like gorillas in the mist, really.

Princess Anne shrugged, and Jacques shook his head in bewilderment.

"God," he said. "It's a good t'ing she doesn't wear leather pants. She'd smell like a burning clutch!"

One of the things that can be marginally considered a bonus where I work is that one has to work jolly hard to get fired. Possibly because no-one has received a raise in at least five years (except for the 2% cost of living increase, which is a pittance) and the fact that we get paid shittily, my employer is pretty tolerant when it comes to time off for doctor's appointments, illness or just needing to leave early and come in late. The Queen of Excuses for Goofing Off is Yvette, who will leave work because she thinks she *might* be coming down with something. And when she is there, she spends a good portion of her day on the phone. Or surfing the net looking at wedding dresses.

But when it comes down to being actually dismissed, it hardly ever happens. I mean, someone once told one of the other billers that she was a "fucking cunt" to her face in front of witnesses and didn't lose their job over it. In fact, the last people to be fired from my particular branch actually embezzled from the company. Their niece still works in dispatch.

So imagine my surprize when I discovered that Sylvester lost her job yesterday afternoon. I missed it (thankfully, I'm no fan of drama and there's been plenty of that lately) due to a doctor's appointment, but the official reason given was that her performance had deteriorated. That excuse stank of dead fish to me, and Princess Anne finally said that it had something to do with some other stuff that wouldn't look good on Sylverster's record. Remember when I told you all about how she made a play for one of the male dispatchers? Well, it seems that she would go back to his desk and massage his shoulders and pat his head (?) and just generally made him uncomfortable, to the point where he complained to Jacques.

And I guess Jacques took care of it.

Sylvester should have been more discreet, and it is good to know that my employer does have some standards. But I will also say that they are double standards. There is certainly no room in the office for sexual harrassment, but there is also the ongoing spectacle of Jacques himself bowing and saying "Ah-so" virtually every time he sees me. And Mulan sits on the other side of the wall from me, so seeing or hearing him is only a matter of time. And I have received emails from Springsteen's husband that are frankly racist and would be very embarrassing should they ever be found by Mulan or some of our Islamic drivers.

But these people are in a position of authority and responsibility, and firing them--or even disciplining them, I imagine--is beyond the pale, even if people felt they could complain and be heard.

So while Sylvester really has only herself to blame, I venture to say that she shouldn't be the only one looking for a new job.

And that really sucks.
Posted by Philippe de St-Denis at 19:44 1 comment:

I was off work for most of this week with muscles aches and a general, overwhelming sense of ennui. Nevertheless, the office politics managed to reach me at home, making for a rather pissy convalesence. What an incredible shit-show that place is. In fact, as I have mentioned to friends, it feels more and more like I am trapped in a sitcom that is a cross between Green Acres and The Facts of Life.

None of it is even really blogworthy, therefore not worth retelling here. Just trust me when I say I clearly work with a group of rural thundercunts who haven't grasped the fact that high schoo lis years past.

None of the politics are Teeth's fault, surprisingly. In fact, this week would have ordinarily been a good one, as she is on holidays. She has gone to join her husband hunting in the bush, which cannot fail to make me think of these two: 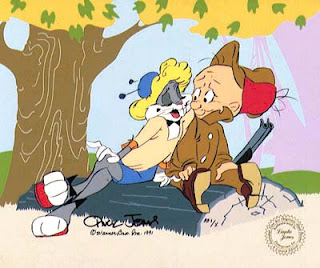